Marijuana and the Teenage Brain

Listen to an audio file of this tool.

From the time your child is born, you create enriching opportunities where your child can

You see your child develop and change in extraordinary ways. You know their developing brain continues to mature as a teen. In fact, during the teen years, your child’s brain goes through dramatic changes, second only to the first three years of life!1 This makes the teen years particularly vulnerable to negative impacts on the brain. During this stage, from approximately 12 years old until the brain is fully developed in the mid-20s, substance use can significantly harm the brain.1 Using marijuana in the teen years may result in negative changes to brain development and function. Let’s explore:

Most Montana high school students (79%) do not use marijuana.2 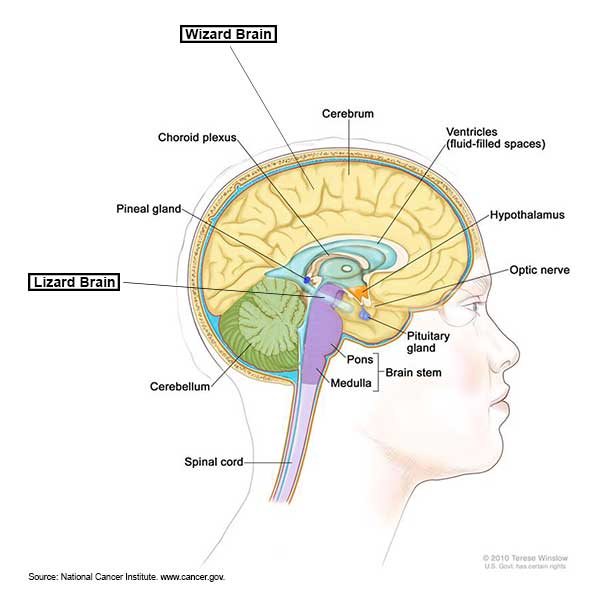 The limbic system is a reactionary system and can be called the lizard brain because it is the most primitive part of the brain and is comparable to the entire brain of a lizard. It is fight or flight, but not a lot of thought. It tells your teen to jump out of the way of an oncoming vehicle when there is little time to think about it.

The prefrontal cortex is responsible for

The prefrontal cortex can be called the wizard brain. It is the thinker. When the wizard brain is in charge, your teen will stop and think things through and consider consequences.

This disconnect between the lizard brain and the wizard brain is made worse by substances. Use of marijuana or alcohol during the teen years can disrupt healthy brain development and slow the development of the wizard brain, thereby increasing the likelihood of engaging in risky behaviors.

Even though a teen may know about the risks associated with marijuana, in certain situations, they may still choose to use marijuana. “I just wasn’t thinking” is partially true because of their developing brains.4 Because teens are very “now” oriented, whatever immediate situation a teen is in at that moment has a significant impact on their decision making.

As a parent or someone in a parenting role, you have probably already had multiple conversations about the harmful consequences of using marijuana, drinking alcohol, or trying other drugs. And, you may have ended those conversations feeling confident that your teen understands the risks. However, all the brain matter that’s required to apply their knowledge at the right time may not yet be there – the wizard is likely still sitting in the back seat instead of the driver seat.5

The way to support your teen’s brain is to prepare your teen for high-risk situations that they will encounter by continuing to have frequent conversations about substances like marijuana and alcohol. Teens need the structure and support of their parents or those in a parenting role to help prepare their brains to make the right decision when the pressure is high.

Using marijuana during the teen years increases the risk of addiction and other long-term consequences.6

Impact of Marijuana on the Brain

While there is plenty of evidence and clarity on the specific ways alcohol impacts the teen brain, there is less conclusive research on the exact impacts of marijuana. Because the brain goes through significant structural and functional changes during the teen years, many experts support the theory that marijuana, like alcohol, has a greater negative impact on a teen brain than on an adult brain.7,8

It would be unethical to conduct experimental research on teenagers in order to answer the questions about the impact of marijuana on the brain. So instead, researchers use animal experiments, such as those conducted on rats, to understand the impact of marijuana on animal brains and draw conclusions about the likely impacts on humans. In animal studies, exposure to THC, the active ingredient in marijuana, negatively impacts the development of the prefrontal cortex.8 As the wizard brain, the prefrontal cortex is similarly critical for both animals and humans. The prefrontal cortex is one of the last brain regions to fully mature and is responsible for high-level functioning, such as

Disruption of the prefrontal cortex has also been linked to long-term changes in the flexibility of neurons, which hinders learning and memory.8

Additional research is currently being conducted to gain more clarity on the exact impact of marijuana on the teenage brain, including a large-scale, longitudinal imaging study that will follow a diverse group of people from childhood through young adulthood.9 Until we know more, experts urge caution. It is clear that teenage marijuana use is associated with lower educational outcomes and higher risk for cognitive and psychological challenges.6 We do not yet know exactly what changes in their brains might cause those impacts, but we do know that the teen years are a critical time for the developing brain and disruptions to brain development can have severe, long-lasting consequences.1,7

Can Parents and Those in a Parenting Role Really Make a Difference?

With marijuana, the age of the person using matters in terms of the negative effects. Younger people are more susceptible to severe and long-lasting consequences. Preventing your teen from using marijuana, whether that means preventing them from ever using or delaying their start until at least the age of 21, greatly minimizes their risk.6

Teens who learn about the risks of drug use from their parents are less likely to use drugs than those who don’t.11

The teen brain is more susceptible to the negative effects of substances such as marijuana and alcohol than an adult brain over the age of 25. Because the teen brain is still developing, marijuana use can damage the brain in ways that are long-lasting and may even be permanent. Adolescent marijuana use is associated with memory problems, lower IQ scores, and increased likelihood of addiction in adulthood.6,12

Connect with other Montana parents and those in a parenting role about marijuana use and underage drinking at LetsFaceItMt.com.

Download and print the at-a-glance resource highlighting key information for marijuana and the teenage brain.

[3] Strauch, B. (2003). The primal teen: What the new discoveries about the teenage brain tell us about our kids. New York, NY: Anchor Books.

[6] Centers for Disease Control and Prevention. (2017). What you need to know about marijuana use and teens. Retrieved from https://www.cdc.gov/marijuana/factsheets/teens.htm

[10] Ryan, J., Roman, N., & Okwany, A. (2015). The effects of parental monitoring and communication on adolescent substance use and risky sexual activity: A systematic review. The Open Family Studies Journal, 7, 12-27.

[11] The U.S. Department of Education, The Drug Enforcement Administration. (2017). Growing up drug free: A parent’s guide to prevention. https://www.dea.gov/sites/default/files/2018-06/growing-up-drug-free-2017.pdf

[12] National Institute on Drug Abuse. (2020). Marijuana research report: What are marijuana’s long-term effects on the brain? Retrieved from https://www.drugabuse.gov/publications/research-reports/marijuana/what-are-marijuanas-long-term-effects-brain

Recommended Citation: Center for Health and Safety Culture. (2021). Marijuana and the Teenage Brain. Retrieved from https://www.ParentingMontana.org.

I Want to Know More

Tools for the Age of Your Child

Not Seeing Your Issue?

Connect with a Child Care Resource & Referral Agency in your region